In July 2013, Associated Press reporter Tom LoBianco revealed through a Freedom of Information Act request these emails. They showed how current Purdue University president Mitch Daniels targeted Howard Zinn's "A People's History of the United States" for deletion during his tenure as governor.

These revelations helped inspire me to write the following stories and columns:

I also later had both Tony Diaz and Tom LoBianco as guests on my podcast, "The Rob Burgess Show." (HB 1834 would ban Howard Zinn's books in Arkansas schools. So, I sent my copy to a teacher there.)

In my Aug. 8, 2013 column, "A People's History of Mitch Daniels," I issued the following challenge: I would read one chapter per day of "A People's History" and tweet about it using the hashtag #zinnbookclub with each post. Since I purge my social media accounts from time to time, I wanted to preserve an archive of these tweets. I would challenge everyone to try a similar experiment. You can find the complete text of the book on the website History Is A Weapon by clicking here.

This project was cited in my winning Second Place entry for Best General Commentary for Division 5 in the 2014 Hoosier State Press Association Foundation Better Newspaper Contest.

18th July, 2013
01:57 - The difference between @purduemitch and me: He wants to ban Howard Zinn and I would make his work mandatory reading for students. 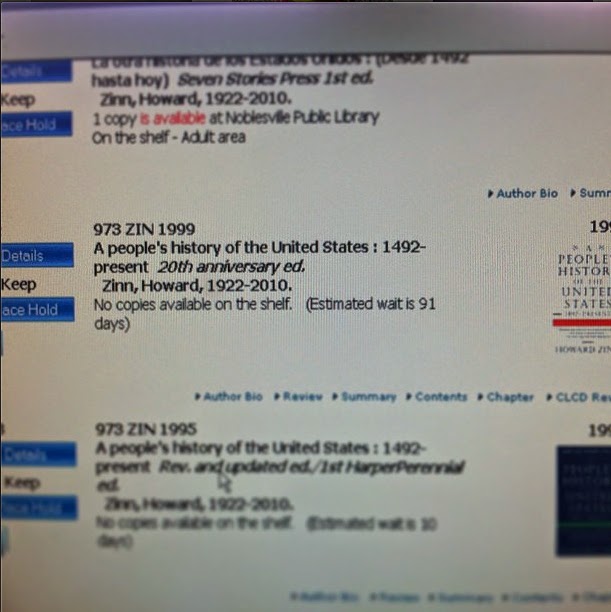 8th August, 2013
14:57 - Powerful Christopher Columbus quote: "With fifty men we could subjugate them all and make them do whatever we want." #zinnbookclub
15:10 - A few grafs into this book and Columbus has already lied, killed and stolen multiple times. I hate this guy all over again. #zinnbookclub
16:37 - The destruction of the natives peoples was so immense. Just terrible. #zinnbookclub
16:54 - Spaniards "rode the backs of Indians if they were in a hurry." Excuse while I vomit. #zinnbookclub
19:25 - Zinn: "To emphasize the heroism of Columbus and his successors ... is not a technical necessity but an ideological choice." #zinnbookclub

9th August, 2013
14:57 - It seems like racism is almost a byproduct of slavery in some ways. Much easier to subjugate those you consider subhuman. #zinnbookclub

10th August, 2013
19:40 - Same old story: divide those whom you oppress, let them fight each other and rule unopposed. Simple. #zinnbookclub
19:43 - Zinn: "The House of Burgesses in Jamestown declared war on the Indians." Not cool, Burgesses! Not cool! #zinnbookclub 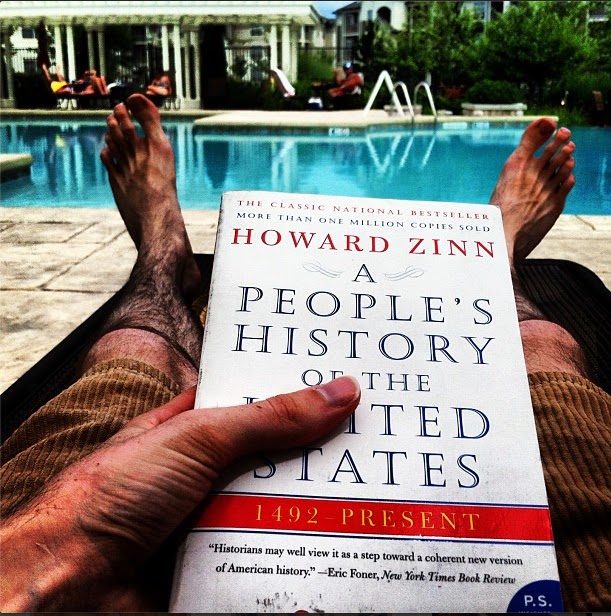 20:35 - I bet what @purduemitch hates about APHOTUS is the acknowledgement of U.S. class warfare. Not a lot of "soon-to-haves" here. #zinnbookclub

14th August, 2013
11:03 - Zinn: "[The Founding Fathers] did not want balance, except one which kept things as they were." #zinnbookclub
11:21 - Zinn: "It was assumed men ... would sin, but women must not surrender." Not exactly fair! #zinnbookclub
11:54 - Took a break from reading about women's historical oppression to fold laundry and vacuum. This is what progress looks like. #zinnbookclub
14:38 - Thanks to @purduemitch, "People's History" is hard to find. Are you reading it? All the cool kids are. #zinnbookclub
19:10 - The term "Indian Removal" is the ultimate in unsatisfying euphemisms. #zinnbookclub
19:20 - Chief Black Hawk: "The white men do not scalp the head; but they do worse - they poison the heart." #zinnbookclub

16th August, 2013
18:56 - Zinn: "Cherokees could not testify in court against any white." Yikes. #zinnbookclub
19:36 - Henry David Thoreau: "It is not desirable to cultivate a respect for the law, so much as for the right."
#zinnbookclub
19:42 - Horace Greeley: "Is not Life miserable enough, comes not death soon enough, without resort to the hideous enginery of War?" #zinnbookclub
20:33 - RT @IU06 @robaburg Cherokees went to SC to fight removal. Marshall said they could stay, Jackson says SC is a joke. Jackson wins, natives gone.

17th August, 2013
12:16 - Zinn: "As often in war, battles were fought without point." He's talking about the Mexican-American war, but could be any war. #zinnbookclub

18th August, 2013
19:48 - No offense to anyone who went to Lewis Cass High School or is from Cass County, but the real Lewis Cass was not a great guy. #zinnbookclub 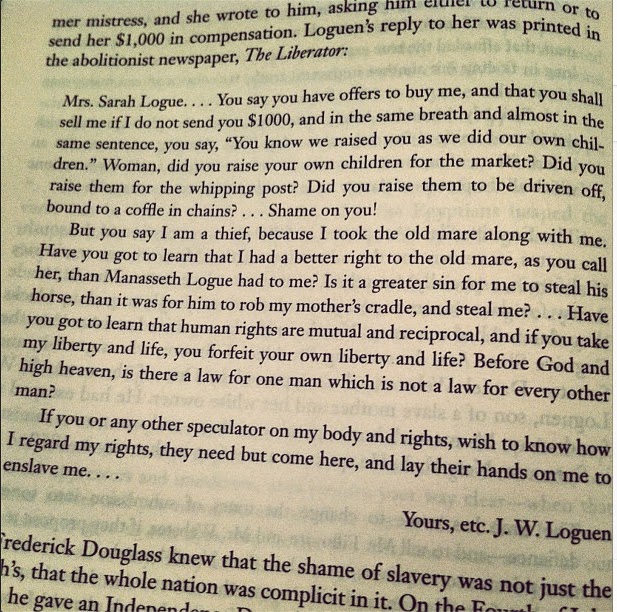 22nd August, 2013
01:39 - Zinn: "The Horatio Alger stories of rags to riches were true for some men, but mostly a myth, and a useful method for control." #zinnbookclub
02:07 - Zinn: "Laws passed by states barred certain kinds of textbooks." Reminds me of someone. Any ideas, @purduemitch? #zinnbookclub 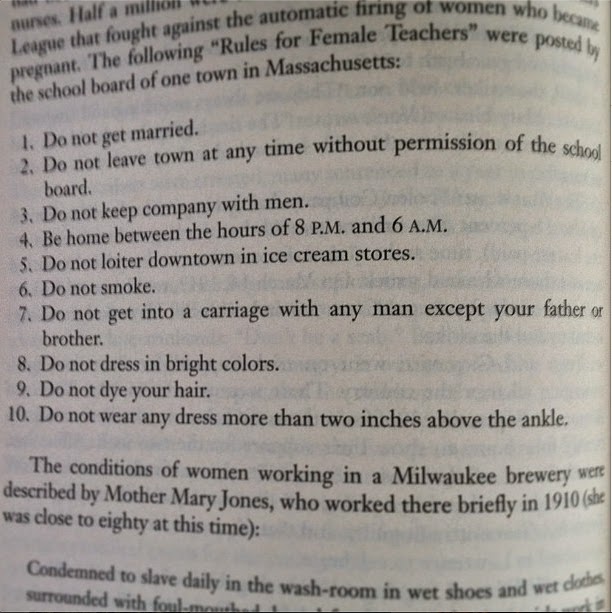 20:10 - Zinn: "The strongest Socialist state organization was in
Oklahoma." Who knew? #zinnbookclub

30th August, 2013
14:29 - Chelsea Manning quoting Howard Zinn: “There is not a flag large enough to cover the shame of killing innocent people.” #zinnbookclub 17:18 - Henry Kissinger, 1957: "With proper tactics, nuclear war need not be destructive as it appears..." #zinnbookclub
17:30 - Rosa Parks: "The driver made a demand and I just didn't feel like obeying his demand." Hero. #zinnbookclub
17:48 0 Malcolm X: "When you stay radical long enough and get enough people to be like you, you'll get your freedom." #zinnbookclub
17:50 - MLK: "When the guns of war become a national obsession, social needs inevitably suffer." #zinnbookclub

13th September, 2013
19:45 - Did no one in the Nixon administration realize the acronym for Committee to Re-elect the President was CREEP? #zinnbookclub
19:51 - Claud Julien: "The elimination of Nixon leaves intact all the mechanisms and all the false values which permitted [Watergate]."#zinnbookclub 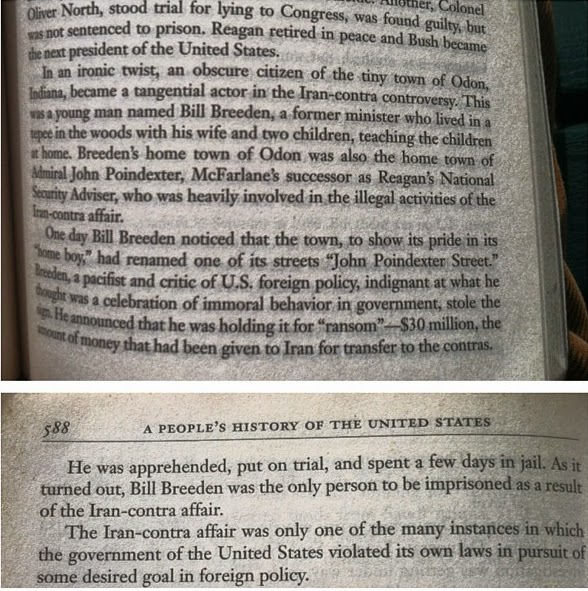 18th September, 2013
20:16 - RT @DavidLTharp @robaburg Great column today. I started celebrating Banned Book Week when I was in high school. I would tape list of banned books to my locker and have folks sign their name next to the ones they had read. The most common reaction: "Why is X banned?"


20:14 - @DavidLTharp Thanks, David! Appreciate it. It sounds like we would have been friends in high school. That's awesome...


25th September, 2013
15:56 Zinn: "In a two-party system, if both parties ignore public opinion, there is no place voters can turn." #zinnbookclub
17:31 George Keenan, US ambassador to USSR: "The general effect of Cold War extremism was to delay rather than hasten ... change." #zinnbookclub
22:13 Zinn on his book: "We need some counterforce to avoid being crushed into submission." Biased? Yeah. And? So, what? #zinnbookclub
22:20 Zinn: "How skillful to tax the middle class to pay for the relief of the poor, building resentment on top of humiliation!" #zinnbookclub
22:32 Zinn: "Most histories understate revolt, overemphasize statesmanship, and thus encourage impotency among citizens." #zinnbookclub
22:43 If you only read one chapter of "People's History," make it this one. Dude is still ahead of his time. #zinnbookclub

27th September, 2013
13:16 Zinn: "There is no such thing as pure fact, innocent of interpretation. Behind every fact ... is a judgement." #zinnbookclub
13:18 Today, I finished "People's History" for the second time, just in time for Banned Books Week. Thanks again for the inspiration @purduemitch!
Posted by Rob at 8:37 PM