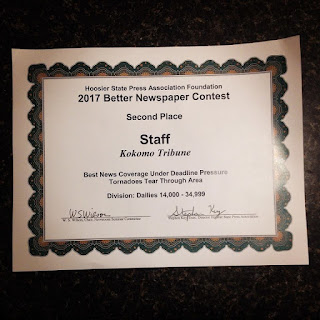 On Dec. 2, 2017, at the 2017 Hoosier State Press Association Foundation Better Newspaper Contest Awards Luncheon and Newsroom Seminar at the Indianapolis Marriott North, the Kokomo Tribune won a staff award for Second Place for Best News Coverage Under Deadline Pressure for Division 5, which comprises daily newspapers with circulations between 14,000 and 34,999. 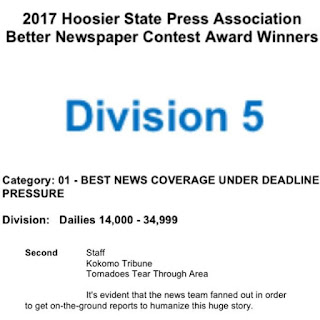 Here are the judge's notes: "It's evident that the news team fanned out in order to get on-the-ground reports to humanize this huge story."

I contributed the following stories to our coverage:

Here is a cellphone video from that day of the Markland Mall Starbucks being destroyed: (Everyone inside was in the bathroom and survived.)

Aug. 24, 2016, when the tornadoes tore through town, Kokomo Tribune staff had to relocate to Logansport for the day to the Pharos-Tribune offices to complete the paper.


Kokomo convenient store running off generator -- and nothing will stop the production of the newspaper. pic.twitter.com/ZATooYruTy
— Vaughn Hillyard (@VaughnHillyard) August 25, 2016 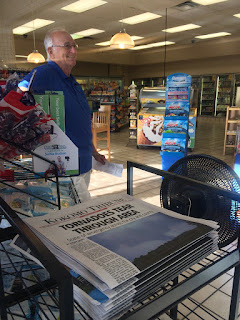 INDIANAPOLIS — The Kokomo Tribune won 14 awards, six of them first place, at the 51st annual Hoosier State Press Association's Better Newspaper Contest Awards Luncheon Saturday.
Tribune photographer Kelly Lafferty Gerber won five of those.
Lafferty Gerber's story "Hayes the Brave" won first-place for Best Sports News or Feature Coverage in the contest's Division 5, for daily newspapers with circulation of between 14,000 and 34,999.
Judges called it a "strong story about a strong child, told without being maudlin."
Lafferty Gerber also won four first-place awards, three seconds and three thirds in the photography categories.
She swept first, second and third in the Best Sports Feature Photo category, and took first and second in the Best Multiple Picture Group category.
Her first-place photo, "Happy Tears," in the Best General News Photo category was a finalist for the 2017 contest's Photo of the Year.
Also winning awards were:
— Carson Gerber, first place in the Best News Coverage with No Deadline Pressure category, for his story "Warrants in the dark."
Judges said: "This is a great look at the dangers [law enforcement] officers face on the job. Serving a warrant might not sound like a dangerous act, but this shows how treacherous it can be — especially at night."
— The Tribune staff, second place in the Best News Coverage Under Deadline Pressure, for its coverage of the Aug. 24, 2016, tornadoes.
"It's evident that the news team fanned out in order to get on-the-ground reports to humanize this huge story," the judges said.
— Former City Editor Rob Burgess, second place in the Best Editorial Writer category.
Posted by Rob at 2:50 PM