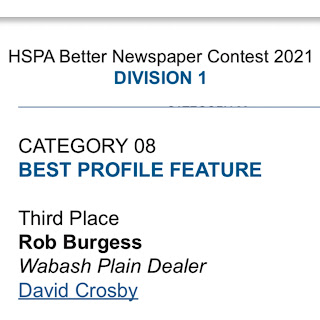 That was one of four awards I won that day in Division 1, which includes non-dailies with a circulation of less than 1,500. Here is the full story about it:

On Friday, the Hoosier State Press Association (HSPA) announced the winners of their 53rd annual Better Newspaper Contest for 2021.

Among those recognized was Wabash Plain Dealer Editor Rob Burgess, who won awards in four separate categories in Division 1, which includes non-dailies with a circulation of less than 1,500.

Burgess’ first-place entry in the Best Business or Economic News Coverage category included three stories on Wabash County family farms, including one about Bowman Family Farms during the 2019 Purdue University Indiana Farm Management Tour, one about 120 years of agricultural history on John Hartsough’s family farm in North Manchester and one about local farmers assisting Dean Stouffer to harvest his fields after he fell ill with COVID-19.

Burgess’ second-place entry in the Headline Writing category included “‘The Bible Memory Man’ cometh,” “Family Video in Wabash checking out” and “Fowl at the fair.”

Burgess’ third-place entry in the Best Profile Feature category was a story about David Crosby before his performance at the Honeywell Center.

Burgess’ third-place entry in the Best Feature Photo category was for “Bringing out the ‘big check,’” which showed Charity Lane being surprised with $50,000 from Publishers Clearing House.

The coronavirus pandemic caused the cancellation of an in-person awards event last year and this year. The 2021 awards were presented on a webpage with opening and closing remarks from Key. For more information, visit www.hspa.com.

“I wish I was standing before you in a packed room but life has changed over the last 17 months,” Key said in his video greeting. “The trial we all endured has illustrated once again the importance of strong, local journalism.”

Key’s opening remarks are followed by the announcement of the HSPA’s special honors and hundreds of individual and organizational awards divided up by the four circulation divisions.

“Your work under these circumstances makes me proud to be a part of the Hoosier State Press Association,” said Key.

Key said the pandemic caused a pause in normal award protocols for the last two years “but not in the quality of work being honored.”

“Newsrooms across the state rose to the occasion producing stories not only about the pandemic but a host of other issues impacting Hoosiers,” Key said. “Your work under these circumstances makes me proud to be a part of the Hoosier State Press Association.”

In June, the Indiana Professional Chapter of the Society of Professional Journalists (SPJ) announced the winners of their 2020 Best in Indiana Journalism Contest. Among those recognized was Burgess, who won awards in three separate categories for publications with circulation below 30,000. 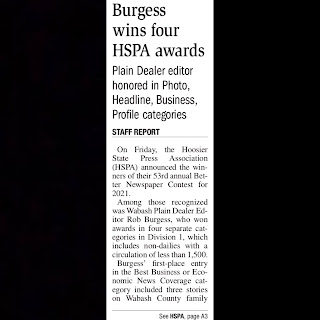 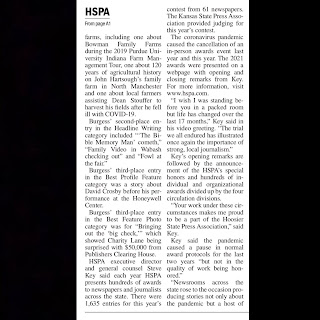 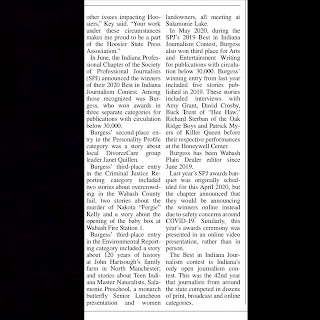 My winning entry included my profile of David Crosby before his performance at the Honeywell Center: 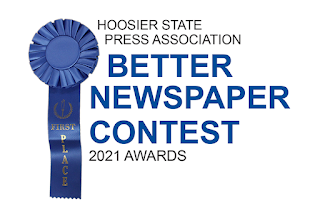