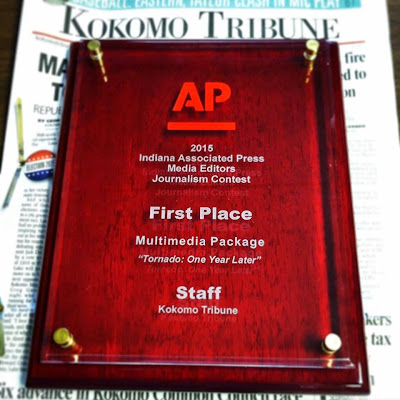 On April 17, 2015, the Indiana Associated Press Media Editors held their spring meeting at the Rathskeller in Indianapolis. The event also featured their 2015 IAPME Journalism Contest awards ceremony, during which the Kokomo Tribune won two awards, including a staff award for First Place for Best Multimedia Package. The Kokomo Tribune competed in Division 2, which covers newspapers with daily circulations of 20,000 to 49,999. AP member newspaper editors in Iowa judged the contest. This award was given for the special section, "Tornado: One Year Later," which was published Nov. 17, 2014. I wrote one of the main stories for this package, "Tornadoes damage 300 homes and commercial properties," in addition to three sidebars. I also contributed the audio from my interview with survivor Karen Glendenning for the accompanying video, "One year later: In their own words."

You can view my story and the rest of the package online by clicking the links below: